One phrase you might hear used when describing X-Wing strategy is "whoever commits first loses." Like all catchy X-Wing proverbs, it's a useful rule of thumb, even if it's not always true. But it's also a bit ambiguous. What does commitment in X-Wing look like?

Here's what I look at when identifying commitment in an X-Wing game.

It's another match review, and as usual, this game was played online using the X-Wing module for VASSAL, which you can learn more about here.

This was a Top 4 game in the X-Wing Vassal Tournament, Season 6. The format for season 6 was pretty straightforward: Extended lists, players are locked to once faction of their choice but can otherwise freely change lists as they see fit, and (for this match) 12 round games. I went 5-1 through Swiss (albeit including one late drop for a regrettable win-by-default) and made it through the Top 8 to reach this point.

Flight of the Seasoned Navigator

Here's a red hot take: post-Planning phase dial changes are really strong. Leaving aside the disruptive and generally frustrating effect they have on the game in general, there are few things more conducive to winning than looking at what your opponent has done, looking at your own dial, and saying "actually, no thanks."

Despite relatively wide availability, the generic crew upgrade Seasoned Navigator doesn't see significant play. Throughout all of 2019, it was only recorded as making three significant cuts, once at a Hyperspace Trial and twice at two System Opens. In all three instances, it was used on a large ship with access to Force (Darth Maul in one list, Han Solo with Rey crew in the other two).

History has not smiled upon Seasoned Navigator, but that doesn't mean we can't explore some builds with it and see if there might be something there.

With no impending major events and a points adjustment imminent, I've been spending a fair amount of my X-Wing time playing and theorycrafting Epic. I wasn't a huge fan of Epic in 1.0, but the 2.0 Epic is a huge improvement and feels much more like a real game and less like some combination of meme and meat grinder (meme grinder?!).

So without further preamble, here are some random observations I've had.

For nearly a year, I've been a man with a dark (and somewhat open) secret. With Worlds finally behind me, the time has come for me to step into the light and declare with pride: I am an Imdaar Test Pilot enthusiast. 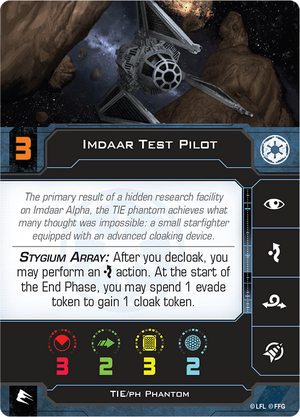 And you should be too. Because this ship is one of the most criminally underplayed and underrated ships in our current game of X-Wing.

Welcome to an On The Rocks Match Review! As usual, this game was played online using the X-Wing module for VASSAL, which you can learn more about here.

If you read my last match review, you know that it was a complete disaster. After blogging about it, the last step in my process of accepting and moving on needed to be getting back on the horse and reminding myself that I'm not actually (always) that bad. It was also a good opportunity to immediately apply some of the lessons learned from the previous affair.

Welcome to an On The Rocks Match Review! As usual, this game was played online using the X-Wing module for VASSAL, which you can learn more about here.

This was a recent match I played as part of the X-Wing Vassal League, a free-to-join league for online X-Wing play involving over hundreds players from around the world. It was, in short, a disaster.